The popularity of rope climbing and bouldering has increased significantly over the past few years and has recently been selected as a new discipline for the 2020 Summer Olympics. With the worldwide indoor bouldering boom comes an increase in injury numbers. In bouldering, the lower extremity tends to have more acute injuries unlike the upper extremity which are typically overtraining injuries. The authors in the study, Mechanisms of Acute Knee Injuries in Bouldering and Rock Climbing Athletes, analyze and describe various traumatic mechanisms of injury, patient demographics, and severity of acute knee injuries in noncompetitive and competitive athletes.

Between 2015 and 2018, noncompetitive and competitive athletes with acute knee injuries related to rope climbing or bouldering were evaluated at an outpatient sports medicine clinic specializing in rock climbing injuries. Diagnoses were made after a clinical examination by a senior orthopedic knee surgeon and radiographs. Athletes were asked to describe the exact mechanism of injury (MOI) which caused the injury and were assigned an experience level classification based on the Union Internationale des Associations d’Alpinisma (UIAA) metric scale. Patients were treated according to individualized protocols and gradually returned to their sport. All patients were seen for a follow-up evaluation at 6- and 12-weeks post-injury.

Over the four-year period, 71 patients were treated with 77 independent acute knee injuries. Four types of traumatic MOIs were identified and are shown in the photo below: the high step position (A), the drop knee position (B), the heel hook position (C), and a fall to the ground (D). Almost half (48.6%) of all of the injuries happened during indoor bouldering, followed by outdoor rope climbing (26%), outdoor bouldering (22.1%), and indoor rope climbing (5.2%). 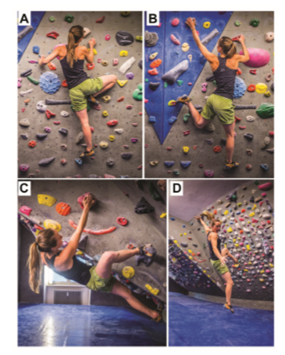 The most common diagnosis reported was a medial meniscus tear predominately caused by the high step, drop knee, and heel hook positions. Iliotibial band (ITB) sprains were the second most common diagnosis caused almost exclusively from the heel hook position. Anterior cruciate ligament (ACL) tears combined with medial collateral ligament (MCL) and medial meniscus injuries were detected in 9% of patients and isolated ACL tears in 2.6%. 91% of injuries that caused a partial ACL tear resulted from a fall to the ground. All athletes returned to rock climbing within twelve months.

This is the first study to describe traumatic MOIs, injury patterns, and outcomes of acute knee injuries in rock climbing athletes. Injuries caused by bouldering activities account for almost 70% of all knee injuries sustained during climbing activities. One explanation is that bouldering routes normally consist of few but very hard moves which require strength and difficult body positioning, placing enormous stress on the medial knee.

ACL tears were more common in females and resulted from a fall. This pattern is similar to other sports were insufficient landing patterns with increased knee valgus is cause for an ACL injury. These ACL injuries were found in athletes with less experience and potentially less body control, stability and strength while landing. Many inexperienced athletes tend to choose indoor bouldering because of the ease of access. All of the athletes with ACL injuries had returned to the sport within one year. Unlike other sports which require running and jumping, the return to sport protocol for rock climbing is more gradual and relatively quick.

Medial meniscus injuries were predominately caused by the high step, drop knee, and heel hook positions. The peak load on the meniscus during these difficult positions is thought to be the cause of these injuries, in addition to insufficient technical skills and fatigue which might cause harmful rotation motion of the knee.

To prevent reinjury, rope climbing is preferred to bouldering to avoid falls and direct contact during the rehab process. The climber can also “down climb” (cautious decent) or “top out” (alternative easy decent) rather than jumping down. It may be possible to develop training programs for both competitive and noncompetitive athletes to address muscle weaknesses and landing patterns. Most climbers neglect the important leg muscles in their training. Active training of the knee stabilizers is important for improved joint control and stretching (ITB) may be advisable. Improved psychomotor skills and body control might better manage and reduce the risk of injury during falls.

There are four distinctive MOIs of knee injuries in rock climbers. Meniscal tears, ITB sprains, and ACL injuries are the leading injury diagnoses and the return to sport is relatively quick. Noncompetitive athletes have significantly more medial meniscus tears and undergo more surgical procedures than competitive athletes. ] Sport-specific awareness training programs to avoid excessive loads on the knee should be developed.

With the increase in popularity and opening of indoor bouldering gyms near our clinics, our therapists are familiar with evaluating and treating climbing injuries. This study presents with data on acute knee injuries and important MOI data to assist in building preventative and rehabilitation programs. A skilled PT can help to assess knee loading during landing and screen for weakness and/or movement patterns in the lower extremities which could be concern for a knee injury. Our therapists are also highly trained in rehab protocols following an acute knee injury and aim to get patients back on the wall as quickly as possible.