What are the Risk Factors for Reinjury Following an ACL Reconstruction?

Anterior cruciate ligament (ACL) rupture rate is the highest in young athletes who participate in sports involving cutting and pivoting (basketball, skiing, soccer) and when they occur tend to be season-ending injuries requiring surgical reconstruction. Female sex and young age have been viewed as common risk factors for initial injury. Even after successful surgical reconstruction and rehabilitation, reinjury to the reconstructed ACL and/or ACL of the opposite limb can occur. At this time, research suggests that environmental and genetic factors may be causes of reinjury. Recently, more studies have become available focusing on the rates of reinjury in younger active individuals, but their results have not been summarized.

In a recent article by Wiggins et al researchers reviewed existing literature and analyzed data found within to evaluate whether a patient’s age and activity level could be seen as risk factors for another ACL injury following reconstruction.

The researchers narrowed down a database search to 19 articles for review. Then they recorded data from populations included in these articles regarding: total ACL reinjury rate (of the same side and/or opposite limb), specific sport an individual returned to if provided, the nature of the sport (low risk or high-risk involving cutting/jumping), and demographics.

The researchers hypothesized that returning to sport and a younger age would place individuals at higher risk for a second ACL injury. 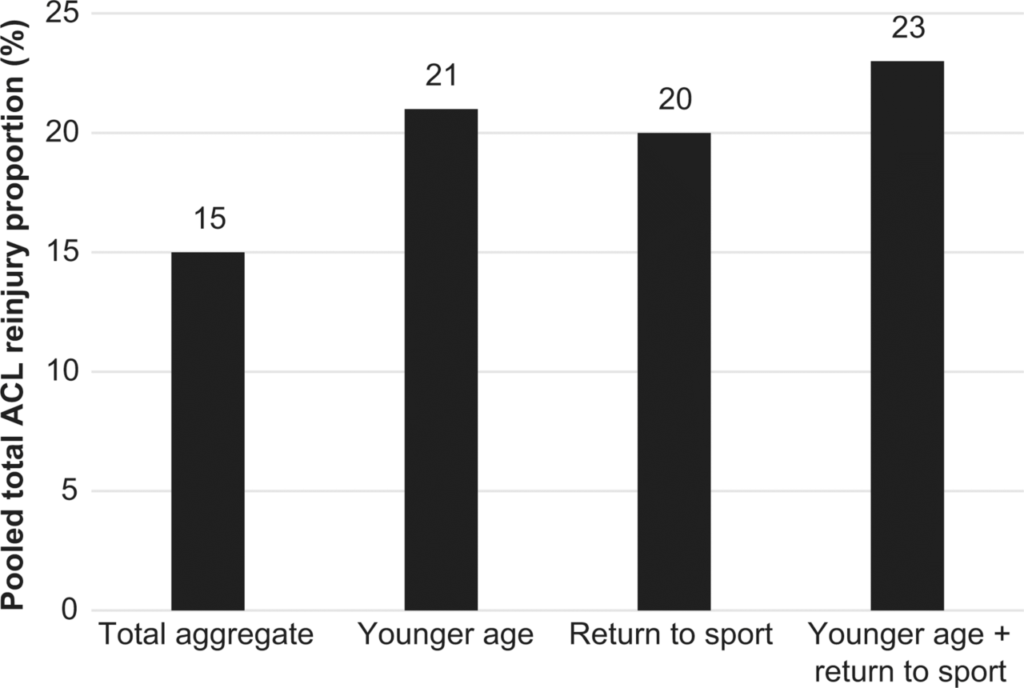 Individuals who return to a high-risk sport and those of a younger age are at risk for ACL reinjury. Almost one-fourth of individuals who are of a younger age (<20-25) and return to a high risk sport that involves pivoting and cutting will either reinjure the reconstructed ACL or injure the opposite side. Based on the current literature the majority of these secondary injuries occur in the knee that has not undergone previous surgical intervention.

What Can Physical Therapists Do to Prevent Reinjury?

Individuals who have or have not undergone a previous ACL repair can be examined by a physical therapist who can determine if they are at risk for injury/reinjury due to factors such as:

Your therapist will then address these issues with a personalized plan of care which may include but is not limited to interventions such as: